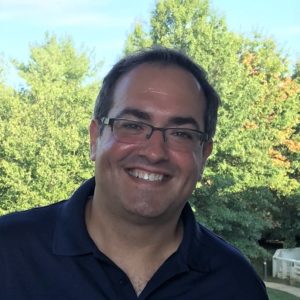 Sam Roberts is originally from California where he grew up at Jewish summer camp. Sam later taught Hebrew school as he received his undergraduate degree in Development Psychology from UC Davis and then later earning his nonprofit MBA. Now over 20 years in direct service in Jewish Camping as a Camp Director at Camp Swig/Newman, Camp Harlam and Capital Camps,  Sam now serves as a consultant to Summer Camps across North America through his position at Camp America.  Through his current position, he works with camps to hire, recruit and support international staff. Sam also serves on the board of Scope (Summer Camp Opportunities Promotes Education) which is a nonprofit organization that provides children from underserved communities with life changing opportunities through the experience of summer camp.

Sam’s loves spending time with his wife, Kim, who is the Director of Education, and his three children Adin, Noa and Yael. Sam enjoys traveling, helping to coach his kids sports teams and BBQing.