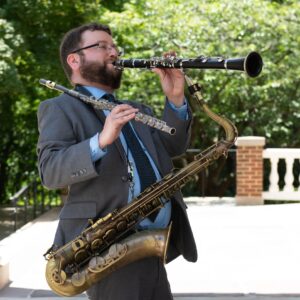 We’re thrilled to welcome Seth Kibel, one of the Mid-Atlantic’s premier woodwind specialists, back to Beth Ami as our Live & Learn teacher and performer in July!

Tuesday, July 5: KLEZMER
Klezmer, which literally means “tool of song” in Yiddish, is the secular folk music of the Jews of Central and Eastern Europe. In the first decades of the 1900s, this music flourished not only in the Old World but also in the New, in the immigrant community of New York City. There, the sounds of the European “fiddler on the roof” mixed with the sounds of early jazz and Tin Pan Alley. The result was a quintessentially American sound.  This presentation will trace the history and evolution of this music, from the Old World to the New, up until the present day and the modern klezmer revival. Vintage audio clips and “live” performances from the instructor will make this program as exciting as the music itself.

Tuesday, July 19: THE JEWS OF AMERICAN JAZZ
An examination of the personalities, lives and careers of Jewish-American musicians — including Benny Goodman, Artie Shaw, Stan Getz, and others — whose pioneering contributions shaped this uniquely American genre of jazz music.  Classic recordings, video clips, and “live” performances from the instructor will make this presentation swing like the music itself!

SETH works with some of the best bands in Klezmer, Jazz, Swing and more. Wowing audiences on clarinet, saxophone, and flute, Seth has made a name for himself in the Washington/Baltimore region, and beyond. He is the featured performer with The Kleztet, Bay Jazz Project, Music Pilgrim Trio, The Natty Beaux, and more.  Winner of 28 Washington Area Music Awards (Wammies), including “Best World Music Instrumentalist” (2003-11) and “Best Jazz Instrumentalist” (2005, 2007-8, 2011-14). His most recent recording, “When You’re Smiling,” was released in 2018 on the Azalea City Recordings record label.  His song “New Waltz” was the Grand Prize winner of 2016 Mid-Atlantic Song Contest (MASC), sponsored by the Songwriters’ Association of Washington (SAW).  When he’s not performing, Seth frequently lectures on a variety of topics in music history for numerous institutions, including the Osher Lifelong Learning programs at Johns Hopkins and Towson Universities.  www.sethkibel.com